During my visits to the Buddhist temples in Chiang Mai, I realized that there is a sacred tree at the entrance of these temples. This tree is usually surrounded by a short wall with Buddha statues around it – this is Ficus religiosa, the sacred fig. This is a very important tree in Buddhist culture since it was under a Ficus religiosa where Buddha attained enlightenment while meditating.

The original plant was in , and cuttings were taken from it and transplanted to other places across the Buddhist world at the time to keep the sacred tree safe. One of the cuttings was taken to , and it is the only surviving member of the original plant. With more than 2500 years old (!!!) this is the oldest living angiosperm on record! The most impressive thing is that the Ficus religiosa found at the entrance of the temples all around the world (including Thailand), are all clones of the original tree in Sri Lanka (in Mahabodhi Temple) that grew from cuttings of the mother plant and are thus all genetically identical! 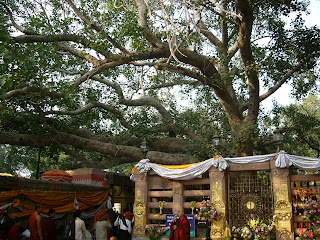 Now, back to botany… Ficus belongs to the Moraceae family – the figs. As some of you might already know, this family is very widely dispersed in the tropics and the presence of white sap is one of the field characters recurrently used to identify the family. But the flowers and the fruits are the most characteristic and weird features, with a very specific pollination syndrome. To begin with, figs are not fruits – they are false fruits, multiple fruits (tricky!). So the fig is actually a group of very small aggregated fruits, enclosed in a structure that we call syconium (the fig). The syconium is also the inflorescence, and encloses all the male and female flowers. The apex of the syconium has a hole (ostiole) from where the specialized pollinator comes into the inflorescence; the pollinators of Ficus are usually very small wasps. As I mentioned, these plants are known for having very strange flowers, and in they are also known as the fruits without flowers, since you can never see the flowers as they are enclosed in the syconium. The truth is also that figs have usually 3 types of flower in the same inflorescence – male flowers are found surrounding the ostiole and two types of female flowers are found in the inner part of the syconium, type one has long styles and type two has short styles. The pollination is carried out by wasps that visit the syconium to lay their eggs and they lay their eggs in the short styled female flowers. 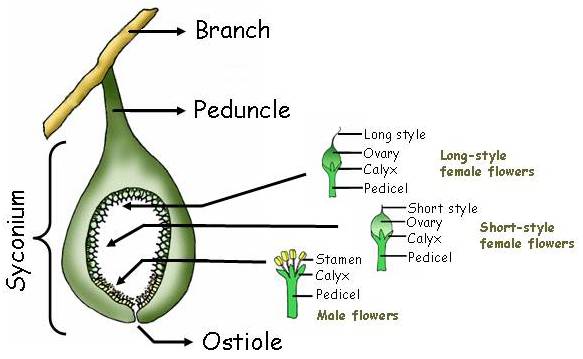 Email ThisBlogThis!Share to TwitterShare to FacebookShare to Pinterest
Labels: Rosales

An introduction to flowers

Flowers are plants’ devices for reproduction, the sexual organs of angiosperms (the flowering plants) and since very early times have kept the attention of humans. Their incredible diversity is probably the most distinctive feature for the identification of plants, having a special importance for botanists. However, not only botanists (or pollinators) have been attracted to flowers – they have a constant presence in our society having different meanings and we heard about them in history, traditional medicine, religion, and even artists from all fields have been inspired by their beauty.

To understand flowers’ morphology is to understand plants’ evolution and co-evolution with their pollinators. Maybe some of you are not interested on the evolution or morphology of flowers, but plants are everywhere, and by giving attention to these beings you will probably find out some surprising things. Although plants are still and silent, they have other ways to communicate with us – we just need to understand how they do it!

My aim with these stories is to explain the floral morphology, development and evolution by using a language understandable to all interested. This might be a nice way for you to get to know better the organization of structures in the flower itself.

On this first post, I will explain a little bit about the floral morphology and the basic floral characters – it will be easier for you to understand the stories and you can always take a look at this first post to remember what the structures are. 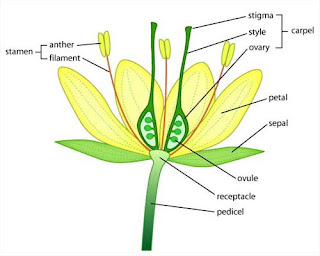 Flowers are formed by fertile and unfertile parts. The unfertile parts are usually to protect the fertile ones (sepals, the green and outermost parts of the flower), or to attract the pollinators (petals, which are usually showy and colourful). The fertile parts are in the center of the flower and consist on the male and female parts. The stamens (male organs), are formed by the filament and the anthers (the structures that produce the pollen grains). The female parts are the carpels and are always found in the center of the flower, surrounded by all the other floral structures. Carpels are formed by the ovary (the organ that bears the ovules and that, once fertilized will originate the fruit), the style and the stigma (the structure that receives the pollen grains, which are guided to the ovary to fertilize the ovules). As plants don’t move they have to pollinators (like animals or wind), to take the pollen to the stigma, this is called pollination.

Flowers are not this simple, but this will help you on understanding the basics of the flower morphology. Some flowers have extra structures, others lack structures, and others have modified structures, having a totally different appearance. I will talk about them later, on each story, as different flower have different structures for the most different reasons…

The Origin of Flower Tales

Flower stories were born during the trip to when I accepted ’s challenge of telling an interesting story about a different flower every night.

At the end of the course I decided to keep on telling the stories to my course-mates, who were by then scattered across the globe. Posting them on a blog seemed to be the best way to do it, allowing people besides them to get to know my flower stories as well.